The Engine Upgrade and Beyond

I want to start this month's update by giving a status of the Engine Upgrade.

Several members of the community have voiced frustration with my last few Engine Upgrade and the feeling that all of this is just "talk". I can understand their perspective after this long. To that end, I will continue to look for ways we can show progress like including very specific steps that we're working on along or the 14 page forum thread allowing SPCT to post work in progress screenshots based on player requests.

This month we completed the review and acceptance of all ~1500 packages. This means we sorted through all the conflicts and promoted either the 3.0 or 3.5 version with notes on the exact issues that need to be fixed.

For the remainder of July we are finishing the tedious process of running commandlets that merge and tweak any conflicts we found. We are also attempting to wrap up the remaining performance optimizations, which have been ongoing. Starting at the beginning of August, we hope to be focusing exclusively on fixing bugs till we can launch the Engine Upgrade on OTW for everyone to test.

This week we also saw significant performance improvements to XboxOne and PlayStation 4 frame rates. We already had builds in test with our publisher, but at this point we may swap those out in favor of these new builds that will provide meaningful improvements to those players. As of the beginning of August, console builds will be aligned with PC since everything is merged into a single codebase.

My goal is to ship the first new set of console releases that contain performance improvements.

Then we will ship a second set of console releases that add all the latest PC content.

I know this all feels like lip service, and I don't have any updated benchmarks yet, but progress has been steady. We are focusing the majority of studio resources on getting this out the door as soon as possible.

RIOT SKINS ARE COMING TO ARMAS NEXT WEEK

On 7/31, players will be able to get all three Japanese themed weapon skins on ARMAS: Yakuza, Dragon, and Koi. The Yakuza and Dragon skins were already available as RIOT rewards, and we will be adding the Koi skin so that RIOT players can still get all three for free.

Here is a sneak peek at the Koi skin. This series was designed to be a bit more detailed than our other skins. Going forward, we will be trying to balance skins between simple designs and more dense artistic designs.

Over the past couple weeks, I have alluded to new content for the main game that will launch after the Engine Upgrade.

This month I want to walk through some of those efforts, and in my opinion these two contacts represent our first big attempt to bring a significant amount of free new items to the main game.

First, we have set these two contacts in Tier 3 based in Waterfront. Second, they both serve as henchmen, but we have added a "tech" thematic to help shape the ways they help their organizations. This has influenced their clothing, weapons, skins, and item rewards.

Lucas Van Rooyen is a hot tempered ex-MMA fighter associated with the Blood Roses. Lynette Casey is an up and coming fixer climbing the ranks of the Prentiss Tigers. 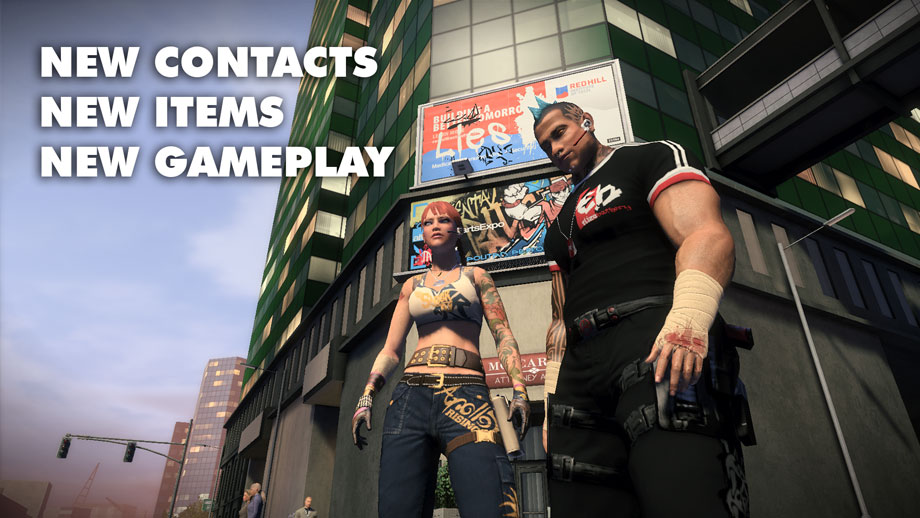 Over the coming weeks, I'm going to start spoiling rewards, but for this blog I'm going to spoil the main reward: The EMP Grenade.

NOTE: This is still being developed and tested, so some of these details are subject to change.

The EMP Grenade will be a brand new unlockable alternative to other grenade options. When thrown, instead of a regular explosion, the grenade will trigger an Electromagnetic Pulse effect that will last for a certain duration. Anything in the radius of that field will be affected until it dissipates.

Two of the larger complaints about the gameplay right now is that Vehicle Spawns can be really frustrating to destroy, and that it's very common for combat to revolve around getting into vehicles to avoid taking damage / regenerate health and postpone the fight. The EMP helps offset these issues by giving players an optional tool that deals with these.

The effects of an EMP field are:

Alongside the addition of EMP, we are modifying Radar Jammer.

In order to make this interesting to play with, we are making the following changes:

After spending a year running the game, I feel like consumables are an area in the game that need a lot of help. Currently they invalidate a lot of mods, while unbalancing the newbie experience versus veterans who have hoarded these random rewards to help them in missions.

Here are the changes we are exploring.

In order to reduce the amount of ammo access in the game, add to the tactical aspect of it, and reduce the likelihood of the limited ammo changes above from causing players to be stuck with a weapon without ammo, we want to remove inventory access from boxes that are limited.

This obviously didn't work out so well last time. Now, after a lot more evaluation, we feel ready to jump back in and try another round.

We will be setting up the same series of test districts so that players can work through changes and give feedback. However, this time we will be adding the test district to LIVE for all players.

I don't have a timeline for when this will start, but we already have the first round of changes ready.

This time around we wont finalize the changes until we have had enough testing.

We want to refocus on shotguns, which we feel still suffer from 2 major issues: unreliablity & not punishing bad aim (especially with the NFAS/Ogre).

The unreliability is caused by the extremely fast widening of the shotgun pellet cloud, making most of them ineffective long before their dropoff range. In theory, no core functionality of a weapon should be so dramatically effected by random chance that a perfectly aimed shot can do almost no damage, or a complete miss can do significant damage. It contributes to the feeling of uselessness of the weapon archetype. There is also pop shooting, which is a particularly difficult to balance use case. Due to the third person camera players can see people coming and use the corner to hide during the fire interval, making them take close to no damage in these cases. Other close range weapons (OCA, PMG, Joker Carbine etc.) require the user to constantly expose themselves to apply damage, this is not the case with shotguns.

The Shotgun changes from summer last year were focused on increasing the reliability of shotguns at the cost of severely reducing the punishment for missing. This new proposal is designed with the original linear damage scaling per pellet, but leaves room to adapted stat wise if needed. We want to greatly reduce the pellet spread, as well as pellet count to both reduce frustrations with the spread making well aimed shots essentially not count and badly aimed shots still counting.

JG-840 - The baseline of the proposed balance is the Showstopper "Thunder", which is by far the most consistent and least irritating shotgun to use in the current balance. Having the stats almost 1:1 transfered to the JG forms a great baseline for the balance of all other shotguns. Changes made compared to the Thunder is evening out the spread at 10 metres and reducing the TTK to be competitive in CQC.

CSG-20 - The CSG has been modified to follow it's design concept as being moderately longer range and more forgiving alternative to the JG, at the cost of being slightly slower to kill. As with all guns in this pass, the spread has been reduced, as well as the pellet count to match.

NFAS-12 - The NFAS is a tricky one to get a good balance on. It is specifically designed to be a spray-and-pray kind of weapon, but currently it is far too effective with the 0.58 second TTK (making it the second or third fastest killing weapon in the game stat wise, depending on how you count the "True Ogre") We reduced the NFAS's spread the least (save the Showstopper and Ogre) in order to accomodate the original design, but the damage has been reduced to make it a 4 STK and the fire rate increased to bring the TTK to a competitive but not dominating 0.72 seconds. Statistical effective range has also been adjusted to match spread.

NFAS-12 "True Ogre" - The "True Ogre" is also a difficult weapon to place in the balance due to the ideal way to play it: wait around a corner for the spin-up to complete, then pop out to use the 0.4 second TTK to kill anything before it can even mathamatically compete. To solve this issue we have greatly reduced the spin-up timer and increase the TTK by adding another shot to kill, with very little over-damage, meaning realistically it will be a 5 STK. This weapon is going to need a lot of testing, and may need the most tweaking to get the balance right.

Shredder - The Shredder remains largely unchanged save for a slight reduction of TTK, evening of damage values and the general spread decrease with corresponding pellet count decrease.

Strife - The Strife currently suffers from an insanely high TTK, not just by CQC standards, but by weapon standards overall. This is the only shotgun to remain a 2 STK, but the damage has been reduced with the fragile modification in mind, removing the ability to kill users of that mod with one shot. The fire interval has also been greatly decreased to 0.9 seconds, though this may be subject to further change if deemed necessary.

Showstopper - The base Showstopper stats have remained largely unchanged, save for adjustments for linear pellet damage. In addition to this, some other strange stand-out decisions were reversed. Reload time is increased to be more in line with existing shotguns, and range has been reduced to account for it's secondary weapon status. The Minimum Damage % has also been brought in line with all other shotguns in game. We will be evaluating the Thunder more thoroughly to determine what changes need to be made.

In addition to shotgun changes, we are also proposing some changes to be done to individual weapons that currently suffer from serious balance issues.

RFP-9 - The RFP, especially the 'Fang' variety with Improved Rifling 3 is currently the go to for all long range secondary engagements. Every other alternative: ACT 44, Colby RSA etc.. is completely irrelevant. The recommended changes are:

The trend for secondaries is that the less range, the less TTK. Roughly following that trend, we are nerfing the RFP by bringing its TTK up to 1.4 seconds and making it a 4 burst (increasing skill ceiling). This should hopefully also increase the usage of alternative secondary weapons.

OCA - The focus here is to revert the OCA to the pre 2014 buff in order to bring it in line with most other short range close quarters weapons. Look at the 'Colby PMG 28' for comparison. It comes with higher damage per shot, a smaller magazine size, more bloom, slower fire rate, yet more range. The OCA is much more forgiving, therefore it should not be faster to kill players. This was previously planned to be a part of the weapon balancing of 2018, but was scrapped due to the amount of focus/attention on shotguns.