Summer is heating up at Little Orbit, and we're back with another update.

I'll start with a General Update, and then jump into Missions #1 & #2 from the game.

Linking Topics in Kickstarter Updates to our Forums

Last month, we linked all of the Kickstarter topics on the GamersFirst.com forums to provide a space for our backers to discuss them. Kickstarter can be a very one-sided conversation, so the effort is to allow for more collaboration. I'm going to continue doing that this month, but since we didn't get any feedback or comments, please let me know if that's something that isn't necessary.

You can visit the General Discussion area of the Unsung Story forums here:

This month we held a series of team-wide meetings to walk through each section of the storyboards. I wanted every member of the team to thoroughly understand what we're targeting for scope and design.

Due to the length, this required more than a week to complete, but we got an amazing amount of feedback that has already generated a number of great revisions to cutscenes and narrative elements that will help streamline the game.

While a couple of the missions got moved around, none of them were cut or materially altered.

Last month, I mentioned that we will use the Storyboard to jump start the Strategy Guide for the game. So this month I thought it would be fun to show a small sample of what the Storyboards look like. This is a series of pages for Mission #5 "The Clocktower Incursion" - our Vertical Slice level. You'll see scratch dialog the helps give the narrative writer a feel for what characters are talking about. Don't worry. The writing isn't final. 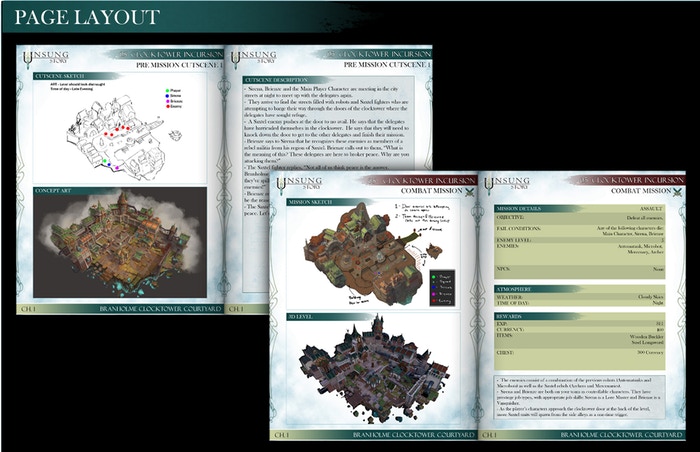 At this point the design team is working on the white boxes for Missions 24 & 25. That puts us halfway through the level designs. Our white boxes are fully playable level prototypes with all the necessary elements, and at this pace we're completing about 4 a month, so we're moving at a good clip. The levels gradually get more complex the further we get into the game, so I'm guessing we will slow down a little bit. But it's important that the design team stay ahead of the conceptual and 3D teams in order to hit our release date.

Lastly, the 2D concepts for Chapter 1 (Missions 1 through 7) are nearly complete.

Our 3D production milestones are out of order with the narrative structure of the missions. We have completed all of the 3D work on multiple missions in the middle of the chapter, but for this update, I thought it would be best if I started at the beginning of the story.

The vast majority of our work in now focused on implementing missions for the storyline.

As part of that effort, our next major milestone is to complete Chapter 1, so that Kickstarter Backers and our testers can play through the first 7 missions with their starter units, gain experience and gold, purchase items from vendors, and train abilities in the first couple jobs.

With that in mind it is very hard to come up with topics and show progress without revealing spoilers.

WARNING: The rest of this article is going to walk through characters, storylines and gameplay spoilers for Missions #1 and #2.

Mission #1 - The Bridges of Branholme

Lasfaria is a turbulent world easily manipulated by sound magic. The Opus, or the First Song, was created thousands of years ago to help keep the world stable and more hospitable to the mortal races. This scene establishes Branholme, the capital city of the Alionne Kingdom, as the central location of this chapter where 77 years of war with the Saxtel Empire has taken its toll. The Alionne army is failing, and the country is suffering from unexplained earthquakes and tremors. Times are desperate.

After the intro cinematic and character customization, the game starts with a brief cutscene in the Opus Room in the School of Technology. This room lies at the heart of the school and is a large cylindrical space of immense power with a hovering ball of light and energy at its center and a series of large rings in place spinning around it.

Maestro Greymore, the Head Master at the school, has hired the player's characters to travel to the edge of the city and escort Sirena, a reclusive Lore Master, back to the Opus Room safely. She has recently discovered critical information and needs to convince a gathering delegation to end the war.

The player leads a small mercenary band called The Unsung. This group does not have loyalty to any of the warring factions and are relatively unknown, making them a perfect choice to help the Maestro; they can be trusted not to betray for political reasons, and they can operate covertly.

Cutscene #2 - The outskirts of town

The player finds Sirena just outside the city's walls at the Branholme Observatory. She wears the robes of a Lore Master (one of our Prestige Jobs) and wields a staff.

Sirena thanks the player for their help escorting her, worried that it's not safe travelling these days. The war has created lots of conflict and you never know someone's allegiance or intentions.

Suddenly Branholme guard bots approach Sirena and the player from the direction of the first bridge. The bridge is disabled behind them. These bots have a strange green magical aura circling around them, and they claim Sirena is trespassing and must be stopped.

She explains that the city is normally guarded by these mechanical constructs, but something has turned them hostile, and the mission starts. 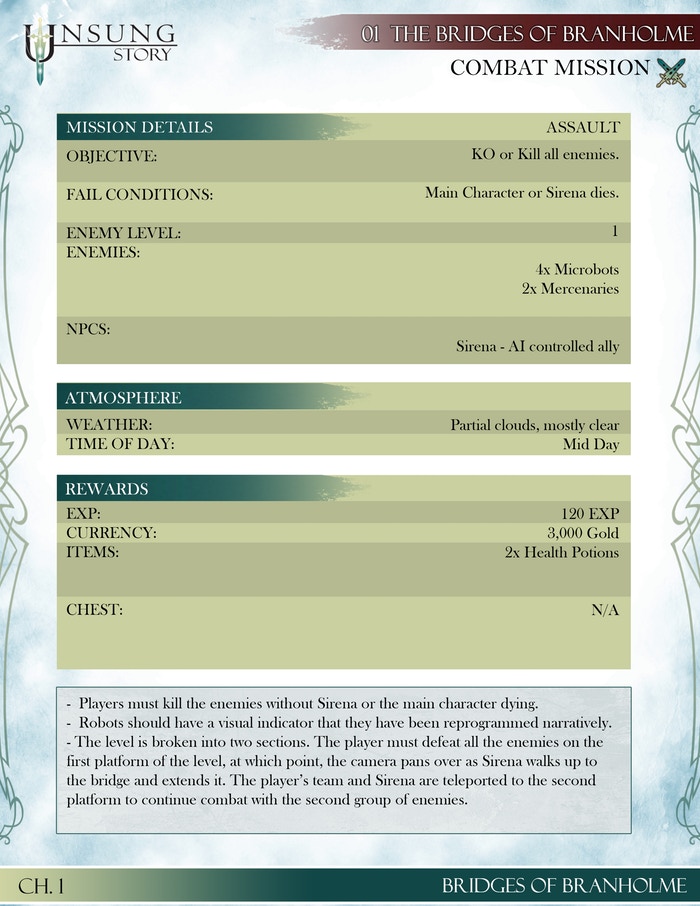 Earlier this year, I walked through the process of our Vertical Slice. We started with the overall narrative, and identified 50 missions. Our level designers created sketches for each mission, and then started building out white boxes so we can play and test them.

Once a white box is complete, we create a Concept Guide.

Here is the Concept Guide for Mission #1.

From there, we work with the concept team to flesh out a series of 2D paintings that match the layout of the white boxes. These concepts are used by the 3D team to build the final level. 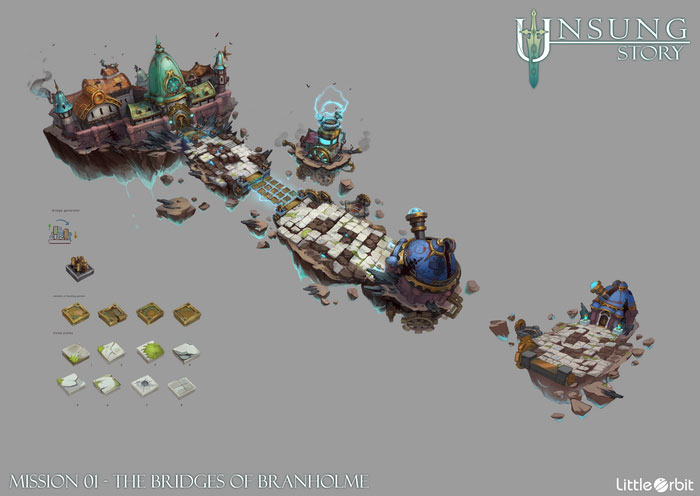 Sirena and the player arrive safely at the School of Technology. It's been years since her return, and she circles the Opus Room in wonder, talking out loud. "You've heard about how we sing into the Opus stories about our world and our lives to preserve it. At this school, we use Technology but each other school is unique with their own form of magic - Mana, Divine, and Nature."

She motions to the Cantors, old singers stationed around the room casting spells directly into the ball of light. "When they sing about our accomplishments, our mastery of magic, and our progress as a society, it strengthens the bonds of the Opus which helps hold Lasfaria together. The world literally depends on this act, keeping the energies of the Opus in harmony."

Gravely, she turns to Greymore, "But something is wrong. I have long been researching the decline of the Opus. The tremors that break our land. Chaos is growing, and soon every nation will suffer as we have. For years we have only sung songs of death and destruction. It's time to end the conflict."

Greymore presses Sirena to convince the gathering delegates from each nation of her findings.

She agrees to go to the meeting but asks for the player to stand guard in case it erupts in violence. But first, the player needs to prepare.

Introduction to the Hub

At this point the player gets a brief introduction to the Player Hub where the player's units can rest, equip themselves, and work with other craftsmen to improve.

Feel free to comment on this mission on our forums here:

We step into the secret chamber to find that all four delegates from the most powerful areas in Lasfaria have arrived and the meeting is already in progress. The Queen of Alionne looks frustrated. Things aren't going well. An argument has broken out between the delegate of Jelamond, a small country to the north and home to the School of Divine, and Lethanor, a territory currently under Alionne control on the border of Saxtel and home to the School of Mana.

Sirena attempts to interrupt with her important scientific findings, but they ignore her.

Brienze, the Horned former Emperor and delegate from Saxtel, slams his fist on the table to gain everyone's attention. "The soil has claimed enough of our tribes."

Suddenly, a loud metallic bang spooks everyone. Their secret location has been compromised.

The player rushes outside alongside Sirena and Brienze and are surprised by attacking bots and sinister Saxtel units that have invaded the city. Brienze quickly denies any connection with the attacking Saxtel units and jumps into the fray to protect the delegates.

Do you trust him? 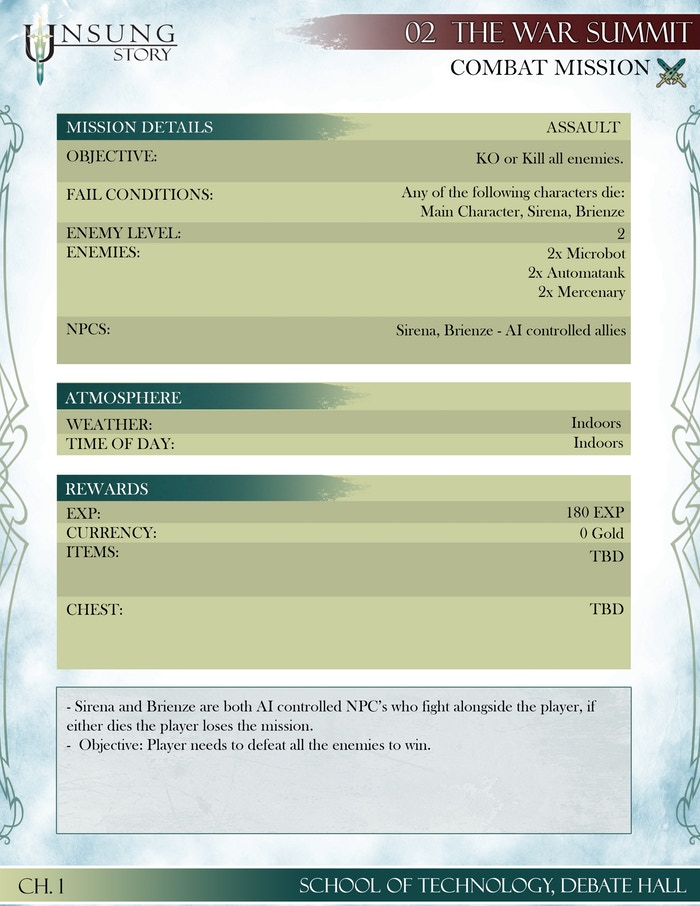 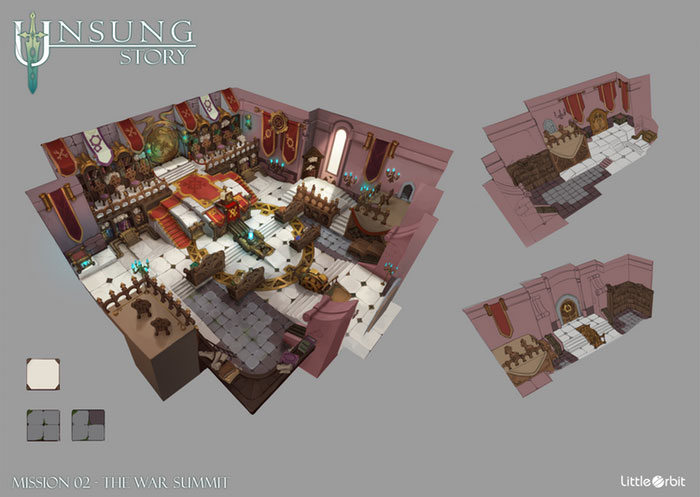 Feel free to comment on this mission on our forums here:

And that is where I'll leave it for this month. If you like this walk through, let me know. I can continue our progress through Chapter 1 next month.