This month we're going to take a break from showing off art, and instead I'm going to walk through a fairly large change we are making to the design of Unsung Story.

We're not going to be moving forward with the Triangle Grid.

Changing gears this late in the project is very difficult. It's a particularly hard decision because I've already made and reversed this decision once before. But more painfully, it invalidates a bunch of work the team as done.

However, I'm going to spend our December update discussing why this needs to happen.

For those that want the context around the grid system discussions, I had originally posted an update in December 2017 saying that based on extensive analysis, the Triangle Grid didn't work. You can read it here.

My conclusion back then was: The Triangle Grid system added complexity without really adding value. It's harder to estimate distance or directional facing – the two core elements any good tactics game needs to help communicate.

Then during my visit to Tokyo in January earlier this year, I met with Matsuno, and he adamantly insisted that the Triangle Grid did work, and he challenged us to avoid cutting it. So my team spent a couple weeks working on the issues, and we came up with what we felt was a nice solution. I showed off an early prototype in my March update. You can read it here.

In that update, even though we had found a way to make the system work, I acknowledged: I'm taking a risk in one of the biggest gameplay systems in Unsung Story - a risk that introduces a million new ways to fail. Hopefully it will be worth it.

Since then, you've seen some of the progress on our Visual Target mission, the 20 classes and 240 abilities, and the 50 white box missions for the rest of the game.

However around the 1 year anniversary in August, issues started popping up with the mission designs.

Early testing on some of the levels showed that while they were functionally complete, they just weren't fun to play. We started back tracking over the issues and making adjustments, but the issues we encountered didn't change. Ultimately we have come to the conclusion the majority of the problems in the levels rest with the Triangle Grid.

To be clear, the Triangle Grid does technically work. That was my initial problem back in December. We solved that, and I'm even a big fan of how we implemented it.

But now we've hit a new problem - the Triangle Grid doesn't work for a tactics-style game which needs to focuses on the following:

For the next couple examples, I'm going to refer to the mission design for Chapter 5 Mission 5. You can see both the Triangle Grid and Square Grid white boxes for this mission. 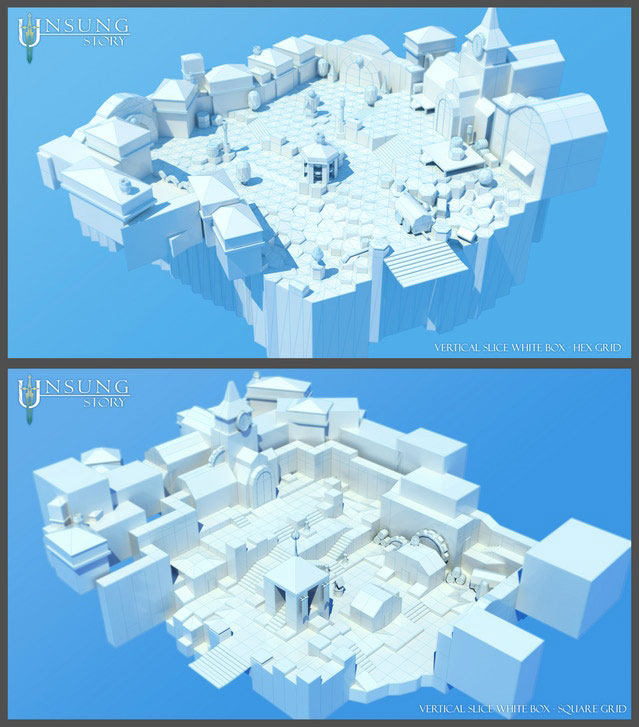 NOTE: We started using hexes in our Triangle-based white boxes. This was done just to approximate the geometry and to lock down movement areas. After that we went back and smoothed over the hexes and swapped everything to triangles. From my perspective the main benefit of the Triangle Grid (as opposed to traditional hex grids) was to get organic looking levels that didn't require have hex-shaped art everywhere.

Now onto the issues:

First, you'll notice that the Triangle-based white box is much larger than the Square-based white box. This is because with six directions you can't turn as fast, which means that you have to move farther to engage things. Each move feels less precise or meaningful. In a tactics game, I would argue every move should feel important.

You can see how large we had to make our Visual Target level in our July update here.

After playing a couple different levels with the Triangle Grid, we've noticed that you can't get a lot of verticality. You can see this above. The bulk of the main movement area in the top white box is flat. This is because you can't easily model stairs or smaller roof areas in the Triangle Grid.

In the bottom white box, we see all kinds of vertical options with stairs, accessible rooftops, etc.

Looking at the top map, you can see that it might work great for a ranged combat game in the style of XCOM. Since the scale is larger, melee abilities are limited and become problematic.

For Unsung to truly work in a Triangle Grid, we would need to re-work about 50% of the classes and abilities to focus more on ranged abilities. We would need line-of-sight rules, cover points, and mostly flat levels. But then that would be an entirely different game...

So where do we go from here?

Honestly, there's a lot to re-work. Over the next couple months we'll be going through each mission's white box to convert it to the Square Grid and building out new UIs for how spells and ability ranges are rendered.

This month, I'm going to show off some of our progress converting a specific mission to the Square Grid so you can see how this plays.

STANDARD DISCLAIMER: You're about to see some very rough work-in-progress. This features "Heroic" characters without any of the changes for the "Classic" look, and there are a LOT of placeholders. The Plagueweaver unit on my team is meant to be an Elementalist. The Disciple is a Physician, and the Sharpshooters are supposed to be Archers. UIs, grid indicators, and damage VFX are all temporary.

You'll also notice a lot of the UIs have been removed because we're working on re-implementing them with the final UI style guide. Don't worry, those will be back soon.

Welcome to Branholme! You and your band of mercenaries have just arrived upon this floating City of Wonder at the behest of your latest client. They weren’t very forthcoming with the details; but the pay was well above expectations so any questions from your side were minimal. Get in, protect an important figure from any unsavory types, and get paid. You’ve done this a hundred times over in a hundred different ways. How could this be any different?

Here is the write up from one of our designers explaining how we got to this mission:

When players first find themselves at Branholme, they are tasked with locating and protecting a very important figure within the world of Unsung Story. Unbeknownst to you and your party, a rival faction covertly sent units into the city just days before, and their mission isn’t as helpful as yours… Almost as soon as you locate your target, the enemy springs into action, and you are suddenly face-to-face with an overwhelming force right in Branholme’s town center! Fight through the town, keep your end of the bargain, and try to get out alive.

In this first sequence, we had already started work on re-organizing how a player's turn works before we changed the grid. The goal is to allow players to preview movement and attack ranges before they commit to their turn. Many tactics games punish new players by not allowing them to undo a mistake. In this sequence, I'm moving my Archer (represented by the Sharpshooter) and I'm trying to see how far her range is so I can hit the enemy's Archer with my Toxic Arrow ability.

Next, I use my Physician to heal another unit. 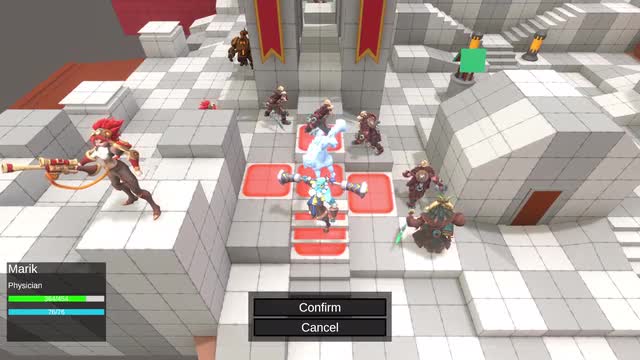 Then I massively underestimate the enemy's ability to gang up on me. My Mercenary doesn't last long. The black ball over a unit's head is a placeholder for units that are unconscious. 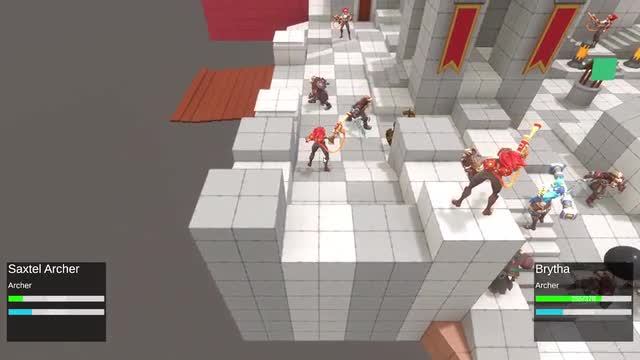 And finally here is a shot of my Elementalist leveraging how close those enemies are together so I can use my Flameburst ability to hit more than one unit. 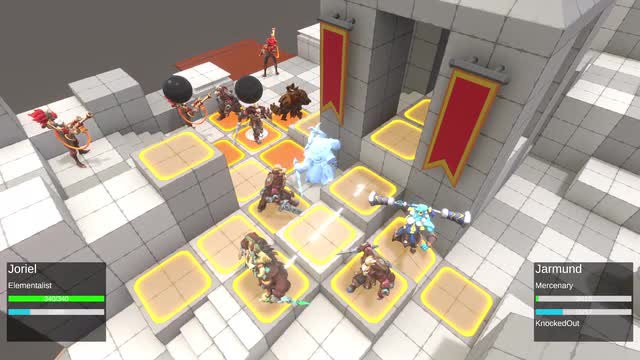 Ultimately I felt like this version of the game is much closer to the feel we want. Each movement felt important. The scale felt good. And ranged felt balanced with melee. We'll be back next month with more progress to show.

But before I go, here's an animated overview of the unit we featured in this month's gameplay footage. 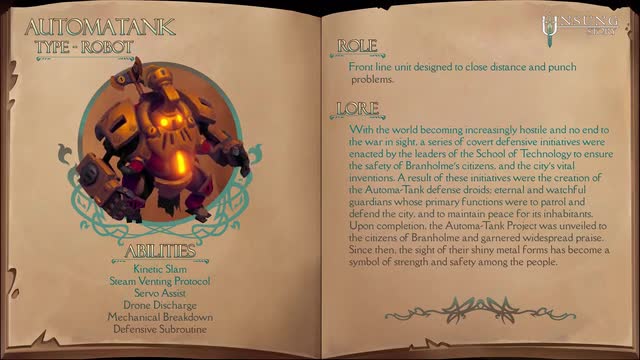