This month we're going to go behind the scenes and give a sneak peek into the process of designing and building out our Character Customization system. We'll also be updating the Job Tree, introducing Prestige Jobs, and revisiting some old Kickstarter Campaign rewards to take a look at how we have decided to incorporate those in the game.

Linking Topics in Kickstarter Updates to our Forums

This month we have created topics on the GamersFirst.com forums, and we are adding links at the bottom of each major section in this update so that the backers can discuss things.

I have long been frustrated by how one-sided Kickstarter updates can be, so our intention is to open things up for backers who want to engage.

We are now officially done with the Storyboard doc.

As you recall, we had to back track through a lot of completed work when we decided to switch to the Square Grid. I know that was a big disappointment to some, but the team continues to feel that was the right decision.

As part of that decision, we also identified the need to get everything into a single document that details the screen by screen flow through the entire game. This is the single largest milestone we will deliver in Unsung Story. It is both a design document and a checklist for the assets needed to complete all 50 missions.

In it's completed form the Storyboard is now more than 600 pages long. I know that sounds like overkill, but each mission takes between 8-20 pages to properly detail out. This includes the original design sketches of the layout, unit placement, enemies, creatures, bosses, mission specific attacks, exp gained, rewards, props, objectives, sub objectives, cutscenes, and rough dialog. We've also left placeholders for the whitebox shots, level concept drawings, and shots from the final 3D models.

I am very proud of our design team and my Art Director who was major contributor in each meeting.

I am also considering using the Storyboard as the basis for the Strategy Guide reward that was promised as part of the original campaign. As some of you may know Prima closed its doors this Spring, and there aren't many companies left in this space. So we have been brainstorming the best way to deliver this reward.

Along side the Storyboard effort, our level design team has continued to work on whiteboxes. We now have 20 of them revised to fit the square grid and match the requirements of the Storyboard. They need to stay ahead of the concept and 3D art team who are plowing through missions at amazing speed.

And now onto the main topics for this month.

As part of completing the Storyboard, we took the time to freshen up our job tree which got a little out of date.

Most of the changes are subtle like changing a job name here and there or moving where it gets unlocked.

Every unit still starts as a Mercenary or a Physician. Those are the two starting jobs, and as they level up you can change Primary and Secondary jobs to equip their weapons and skills. 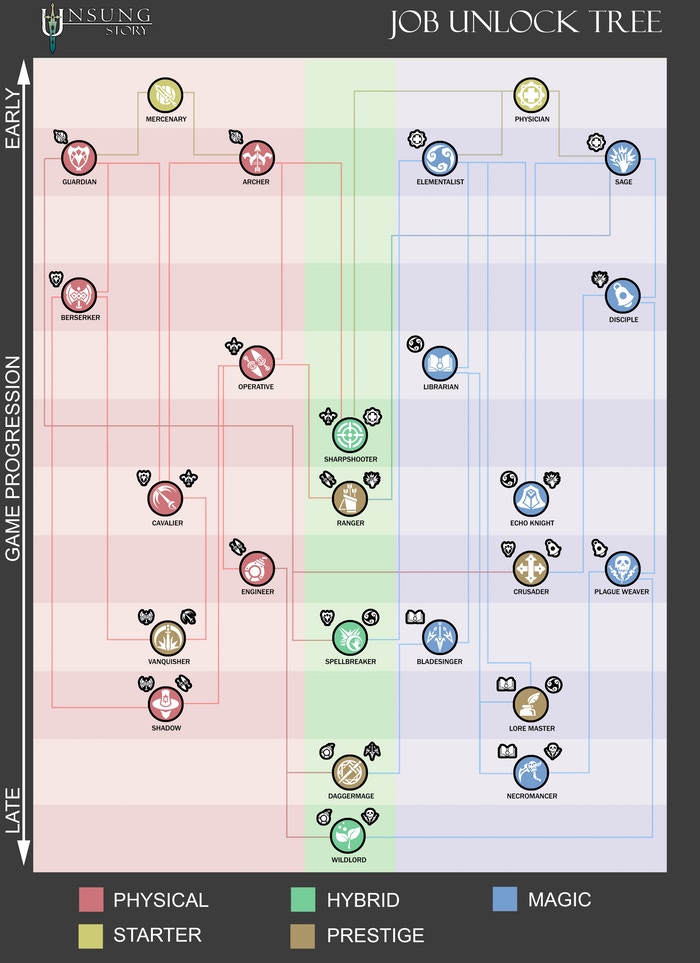 But most importantly, there are now more than 20 classes because we've added Prestige Jobs.

You can discuss the Updated Job Tree here:

As you may remember from previous updates, the narrative of Unsung Story takes place over multiple chapters, each featuring its own unique setting and characters from across Lasfaria. During your journey, you will ally with important figures who are trained in special jobs that are different from the 20 jobs typically available for you and your party characters. We call these unique roles Prestige Jobs, and there are 5 of them in total. These heroic allies will often join your party as playable characters, allowing you to command the exceptional spells and abilities they have to offer on the battlefield!

In keeping with last month's Story Character feature, we thought it would be fun to take a look at some of the allies you will meet and the Prestige Jobs they ascribe to:

Early in the game, you will meet the renowned soldier, Brienze Dupree, a skilled Vanquisher. The Vanquisher is an exceptional melee fighter, great at counterattacking and becoming more dangerous when either the Vanquisher or their foes are at low health. Trying to fight a Vanquisher toe-to-toe is not a wise decision. Here are some of the Vanquisher's skills.

Duel: The Vanquisher taunts an adjacent enemy, forcing that enemy to concentrate their attacks on the Vanquisher. The Vanquisher also becomes enraged, increasing their offensive potential for a few turns.

Terminate: This melee attack deals strong physical damage, while guaranteeing a critical hit when striking an enemy with less than half of their maximum health. A great attack to use on already weakened foes.

In Chapter 1, you will be introduced to Lady Sirena Renfern, an experienced Lore Master. The Lore Master takes some inspirations from both the Librarian and Elementalist roles, employing a blend of offensive and supportive magic in a unique package. Positioning and targeting are crucial to a Lore Master, as well as keeping an eye on how much Focus they need to use. Now, let's look at some of the skills you might see a Lore Master using.

Verse of Air: This is a ranged, single-target, spell which deals a high amount of wind damage. It also grants a boost to the Speed of all adjacent allies when cast.

Measure of Frost: A cross shaped 'area of effect' spell, which does a fair amount of ice damage to anyone caught in its path. Once used, the caster also has a high chance to apply a defensive bonus to themselves.

Chapter 2 finds you alongside Asette Dupree, a female horned, trained in the ways of the Ranger. The Ranger uses a combination of ranged attacks and versatile support abilities. They are considerable offensive ranged threats, but are a bit more durable than the typical Archer. Rangers excel when they can stay out of the melee, supporting their allies, while biding their time to find the perfect moment to strike. They receive bonuses for dealing the blow that knocks-out the enemy.

Gift of the Woods: This ability can target the Ranger or one of their adjacent allies. The target gains increased accuracy and a regenerative healing-over-time effect for several turns.

Turn the Tide: A ranged attack, dealing physical damage to a single target. If this attack knocks-out an enemy, the Ranger may revive one of their own knocked-out allies, getting them back in the fight.

The Daggermage makes their first appearance in Chapter 3, when you encounter the talented Miriam Duval. The Daggermage is a stealthy caster, using elemental daggers to quickly tear and blast apart their enemies. They are the epitome of the 'glass cannon' concept and must rely on their stealth skills to avoid being targeted by enemies.

Umbra Stiletto: A ranged attack, the Daggermage throws a conjured magic dagger at an enemy that deals Dark damage. Then they slip into the shadows, gaining Stealth until their next turn. If the hit is critical, the Daggermage remains in Stealth for several turns, instead.

Meteor Blades: A melee attack that deals fire damage in an area-of-effect pattern after hitting the target. If the Daggermage uses this skill while in Stealth, there is a high chance to apply additional damage-over-time burning effects to each enemy hit.

Our final Prestige class is the Crusader, championed in Chapter 4 by a singed named Sir Roderic Apresa. The Crusader has a wide range of abilities and are heavily influenced by their equipment choices. Capable of protecting both themselves and their allies, they also have the potential to unleash a sudden magical onslaught, but they must carefully balance their focus resource to do either.

Convalesce: A ranged cross-pattern skill, which has a beneficial area-of-effect. Convalesce heals all units in the targeted area; units at less than half of their maximum health will be healed for more.

Smite: A melee attack that deals magical Light damage, the attack has a chance to stun its target when used against an isolated foe.

I hope you enjoyed this quick overview of the Prestige Jobs.

We are excited to give you a more in depth look at these, and other jobs, in future updates!

Some of you may remember the Kickstarter Edition Elite Classes. I'm excited to announce that these Prestige Jobs created for some of our most memorable characters will also be playable for those of you who got tiers or addons that included the Elite Classes, and instead of getting 4 there will be 5.

You can discuss Prestige Jobs on our forums here.

For the rest of this month's update, I'm going to spend some time going through our Customization system. This process starts with Jessica, our User Experience (UX / UI) artist.

She typically starts in Photoshop with a set of approved user interface elements, and then works through the various screens. As you can see, we've been working hard to establish what Unsung Story's interface will look like.

As I said earlier, all units start as either a Mercenary or a Physician. 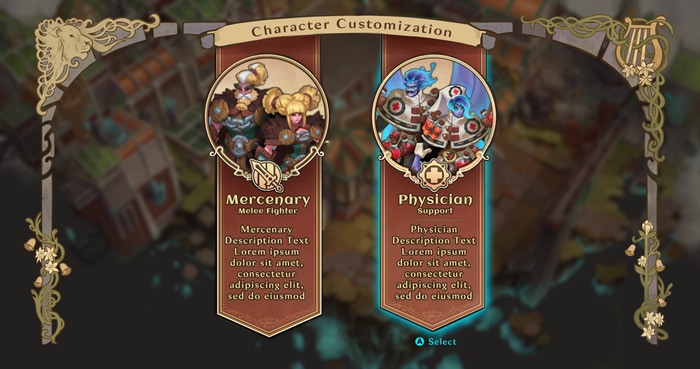 Next we have to choose what race we want our unit to be. Each race has a couple stats that they excel at, so it's important that we leave room on the screen to talk about what makes them unique. 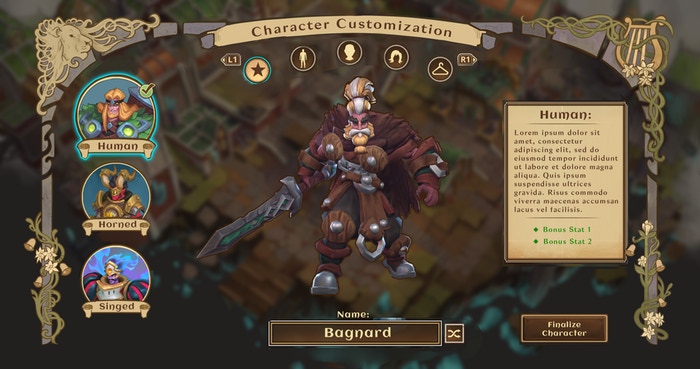 It's not shown here, but the body types will be a mix of male and female. Both the shapes and skin tones will be unique to each race. Choose a Face and Eye Color

We want every one of your units to feel special, so they can have various faces. You wont see the face a lot on the battle field itself, but for selecting units, dialog, and cutscene sequences we'll get up close and personal as they animate in their portrait box. Right now we have about 9-10 hair styles per race / gender combination along with one hair style unique to each job. At the end of Customization you can choose from a couple special themes for your color scheme. We're still working on these, but for anyone who got the Kickstarter Edition Classes then you'll get a special skin. 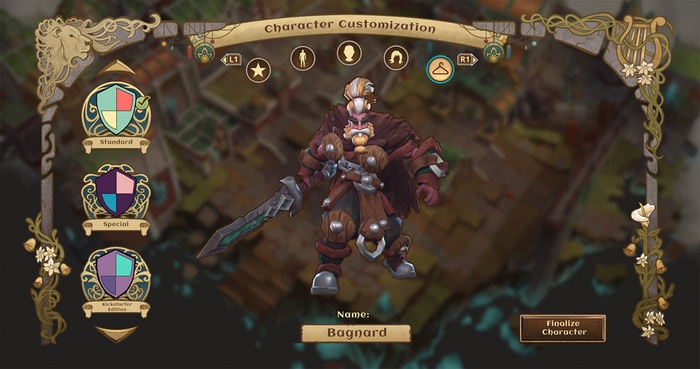 Finally, we've put together a short Work In Progress video showing off some of those customization features. Right now we have most of the basic races, genders, and job outfits modeled in 3D. However, each of those models then has to go through a second "unification" step. This is where the vertices on the model are nudged and pushed to fit each body type so that it works correctly with our customization system. Each job outfit has to work properly with each race, gender, and body type.

This month we finished a cross section of female human models, so we could work through and test the art pipeline before moving onto mass production on the remaining races and genders.

To show things off properly, we cheated in this video and swapped the Physician for our Archer since that was one of the job outfits that has already been unified.

The usual disclaimers apply. There are clearly some unfinished elements, but we hope you enjoy where it's going. 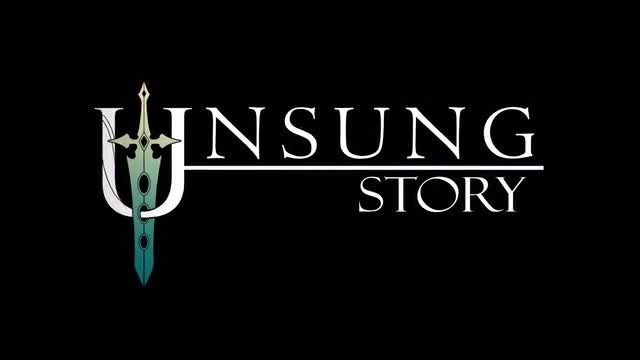 You can discuss the Character Customization work in progress here: