This month flew by. We did our first developer blog about the level design process, and many backers expressed how much they enjoyed the behind-the-scenes look so we're going to do another one of those again.

The Unsung Stream and AMA with Matthew Scott

We are still working through getting setup for the stream. I'm hoping that happens this month, because we have lots to show, and I'd like to spend some time answering questions from backers. Several backers have messaged and asked what the hold up is, so I'm going to have to come clean.

Embarrassingly, I announced the stream before checking with my social team, and it appears someone else on Twitch is squatting on the /littleorbit channel, the /littleorbitgames channel, and several other name variations we tried to come up with. None of these have a single stream or piece of content on them. I doubt this was malicious. Little Orbit was just super slow to actually need Twitch for anything. We started working with them last month to get this fixed, but it is taking quite a bit longer than I expected. We'll keep you posted.

We've gotten a number of requests for physical console editions of the game. I want to confirm that we are going to do this, but it's a bit tricky in BackerKit. The problem is that many of you have already filled out your surveys, and the original shipping methods were not created correctly. So at this point, there is no way to properly insure that folks in tiers with only digital rewards will have shipping costs added, and folks in the tiers with physical rewards already wont get billed extra. We are working through a couple ideas to figure this out.

We haven't locked the pricing, but in general we're hoping to provide Physical Editions on any console version (PS4, XB1, or Switch) for a $10 upgrade fee to cover manufacturing costs.

This remains the largest area of the game that is behind schedule. To address this issue, Little Orbit has brought on a dedicated Art Director. I hope to show off more progress here soon, but as I said last month, art is critical to the game, and we're not going to rush it.

I am extremely happy with the development progress. Not only did we get our first console builds this month, but we also got to play initial versions of several different battle maps that included many new classes and abilities.

So that's what I'm going to talk about for the rest of this update.

But first, here is a quick review of what Unsung Story is all about for context. Back in August we started from scratch and rebuilt the story and design based around Yasumi Matsuno's original ideas.

Matsuno's goals in the design

So there you have it. A narrative told in reverse that allows the player to slowly learn about the past, then visit those battles, and even come back to play them again to experience alternative timelines. At its core, the game focuses on the war. Each map and encounter needs to capture that spirit in a different way.

Last month, I shared the entire class list because it wasn't going to be possible to share progress without discussing those in more detail. This month, we're going to deep dive a couple battle maps and discuss some of the class abilities. Again, the standard disclaimers apply. Some of this will change as we get further into iterating on the game.

At start up of the game, we launch into a Chapter selection screen. There is no History Timeline screen yet. So a placeholder screen features the option to choose 3 maps from Chapter 4 and 1 map from Chapter 2. Once you make a selection, you jump into the battle with test units under your control. These are all real battle maps from the game, and each fight contains units with live stats and skills that affect their effectiveness in combat. We have recently added the turn order of the units, so you can make informed choices knowing which units will attack next. The turn order UI is still work in progress.

Each level is being created with a placeholder tileset that allows us to block in the basic features, elevation points, and obstacles. I won't spoil which chapters and regions these maps below to, but here are some brief highlights.

This was my favorite layout which contains a series of bridges over water where you fight ranged enemies. My units included (1) Elementalist, (1) Necromancer, (1) Sellsword, (1) Archer, and (1) Physician. The enemy archers and casters are the obvious threat, because I have to cross the bridges to get close enough before they pick off my units.

The Physician is new to this build, and he was central to winning this battle because you have to heal in small amounts as you go, or most of your units will get wiped out before the real battle has even begun. He's one of two classes that you get at the start of the game, but instead of being quickly discarded, Physicians have great long term value in the game because they can create some of the most powerful items when they get to higher levels.

Our Elementalist and Archers have gained several new ones to round out their direct damage arsenal. The Necromancer has gained several debuffs and an ability called Devour, which sacrifices corpses to fuel focus and give him more power late in battles.

This battle takes place in a canyon ravine. You'll notice more hex-shaped placeholders. We're definitely not going to use those shapes for the actual art.

I liked this encounter for how different it played from the bridge level. Lots of elevation that you need to work with. The main object is to capture an enemy unit which turned out to be a bit tricky.

This encounter takes place in front of a large fortress guarded by enemy units. This is my favorite for the gameplay. Mostly because it contained nearly all of the new classes for this build including the Shadow, Guardian, Wildlord Berserker, and Sword Speaker. These were such a big departure from the Archers and Sellswords from previous levels that I had to spend a bit of time figuring them out. Remember I'm seeing these units with all their abilities unlocked, so I haven't had the benefit of leveling them up and gradually learning their mechanics.

Here is a quick capture of gameplay. It's super rough, but it demonstrates some of what we're going for across a series of unit moves. 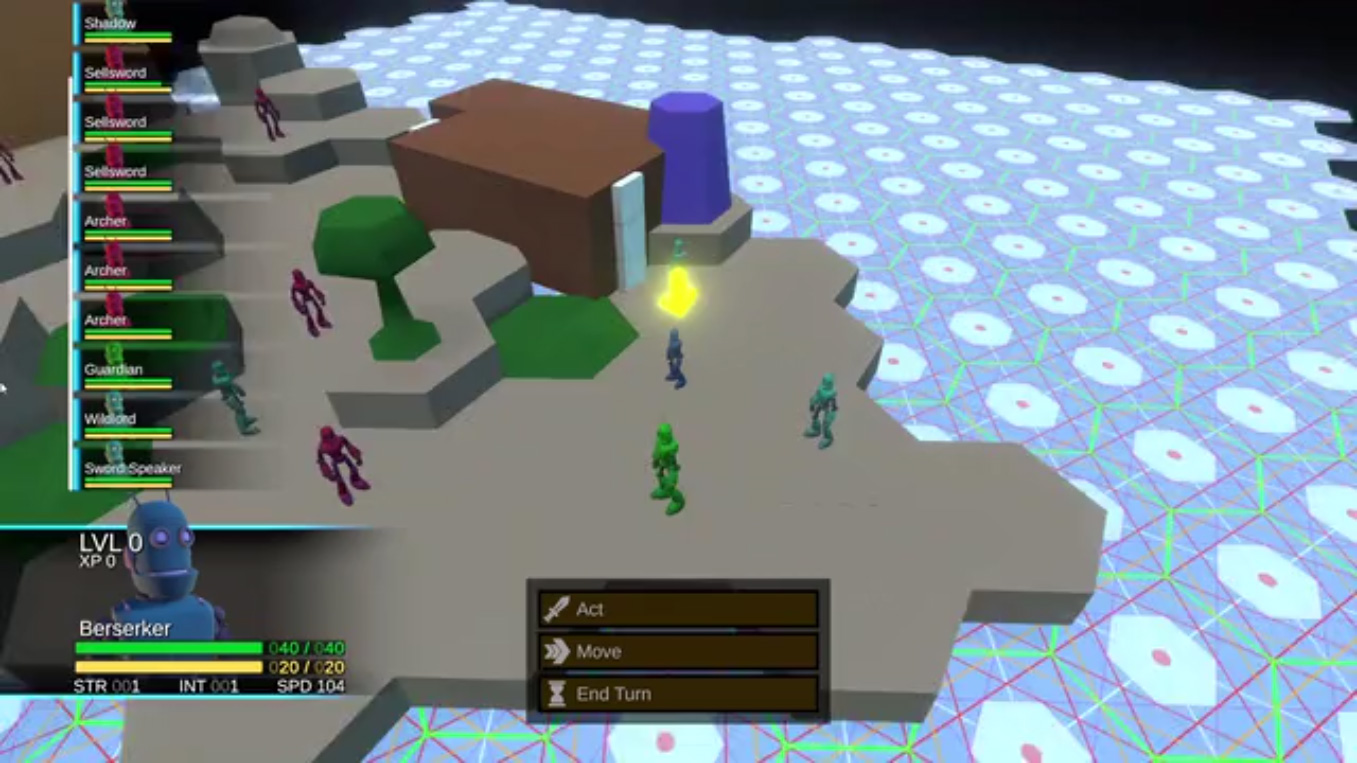 The last level starts with my units defending a large section of fortress from an enemy attack with large placeholder siege devices. It's almost the exact opposite of Map #3. Again lots of elevation tactics in this level, and I found I needed to move around quite a bit to avoid getting hit, while still meeting the objective.

That's it for this month.

As an overall measure of progress:

We barely missed getting in our first major round of animations for this update. The team spent a portion of April working through the Short Sword movements. Still lots of work to go, but coming along nicely.

We'll be back in June, as the team gears up for E3. Look for another developer blog between now and then.