November - Focusing on the Divine

Bonjour from France! I'm finishing this month's update in Paris after Games Week. Little Orbit was here working with our European Distributors, many of whom will be helping us release the retail version of Unsung Story next year.

During the show, I got a small break to stroll around and visit Notre Dame.

Standing in the cold October air under the shadow of such an amazing structure, it was easy to imagine what it must be like for the citizens of Hodh in Jelamond, home of the School of Divine magic.

This month I'll be giving a general update and walking through early conceptual work for the locations and classes of the Divine.

We've been expanding. In October, we added two designers, one character technical artist, and several more developers to the project.

The Storyboard work I mentioned last month is progressing well. We're now complete with Chapter 5 and part of Chapter 4. This is much more than redoing elements of the whiteboxes, it also includes all the dialog, intro and outro cut scenes, and extra objectives. I looked for a small snippet to share, but it's filled with notes and spoilers.

The developers are building out some of the more boring systems like Dialog, Audio, and Streaming based on requirements from the design team. They will also be starting all of the character customization systems in November, since our character technical artist just started.

In addition to the Storyboard and level layouts, the designers have been polishing up abilities and progression, so I'm going to share the class unlock tree. This shows the path for player units to progress from the starting classes through to late stage classes. 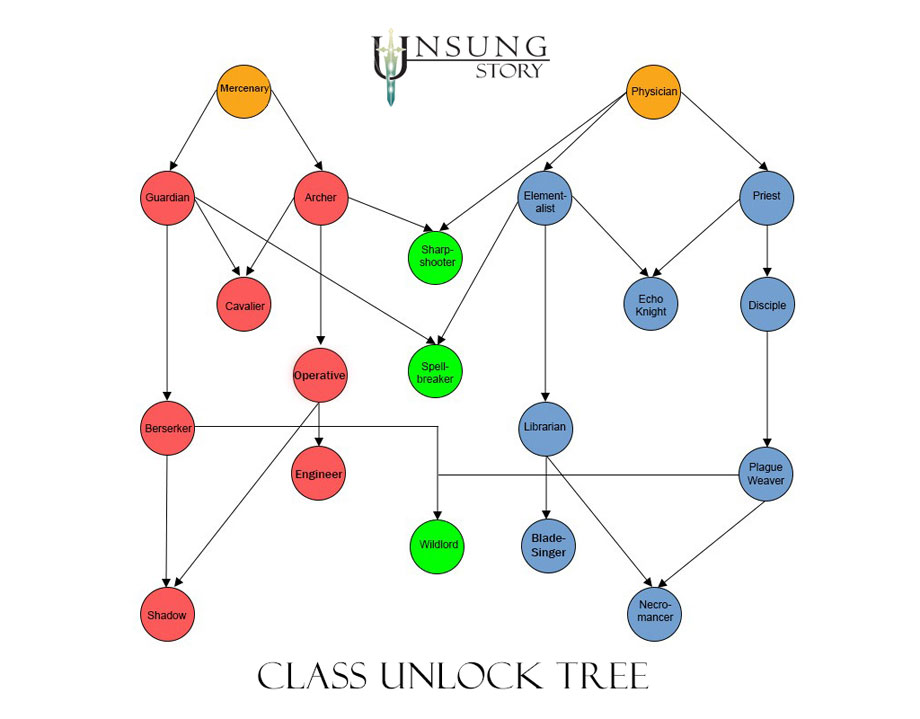 The art team is mostly done with conceptual work. You'll see the last major chunk in this update. They are focusing now on 3D modeling, texturing, and animation based on the requirements from the Storyboard.

There has been a lot of back and forth on the music tracks this month.

I've listened to 20 unique tracks so far. This includes the main theme plus one lighter variation. Some main battle music themes, and then some of tracks for each chapter. This has been incredibly fun, and I am anticipating a trip to Tokyo before the end of the year to help provide final feedback to Mr Sakimoto.

Like I said last month, I'm working on a format that will allow us to share a teaser to some of the music.

And now for the rest of the class and location concepts...

Jelamond and it's capital city of Hodh are among the most “ethereal” of the locations in Unsung Story. Built as high as possible in the Northern most peaks, this country is situated more evenly between the cosmos and the earth. 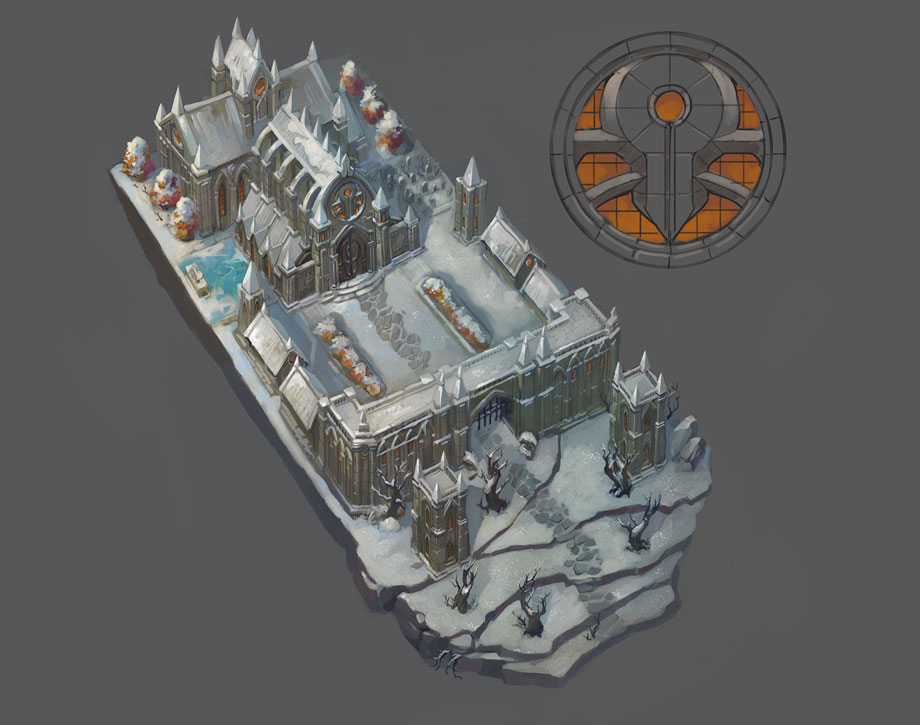 We have previously introduced you to the Guardian class concepts. To round out the School of Divine here are the rest of its classes.

This class unites the arts of swordplay and spellcraft, creating a wholly unique fighting style that can baffle opponents, if they managed to live long enough to consider it. Bladesingers are masters of all weaponry, summoning whichever blade they deem appropriate at a whim.

Necromancers are masters of death, within others and themselves. Often considered deplorable to those unfamiliar with their creed, in truth Necromancers bear no ill will toward the dead, instead opting to utilize that power to its fullest potential in aiding life.

Their primary weapon is a Scythe. They can manipulate corpses and debuff opponents.

This class wields an unusual and incongruous power, warping the very fabric of space around themselves and their foes. The Librarians sing of Echo Knights who have stopped whole legions, all without shedding a drop of blood.

Their primary weapon is the Greatsword. 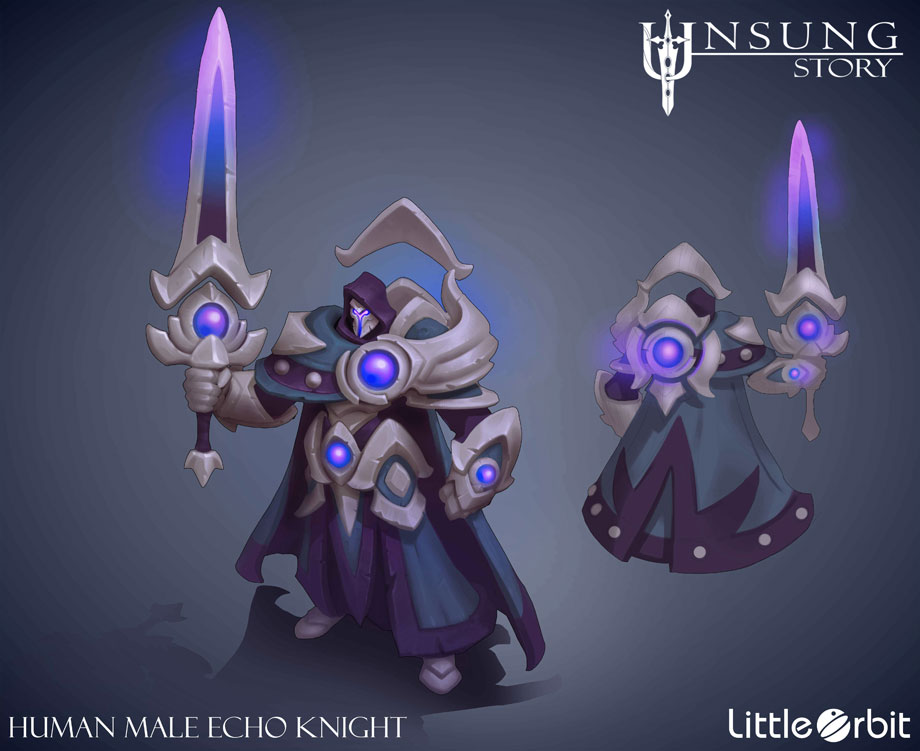 Shadows are the unspoken and unseen hand of the Divine, dealing with matters that the public face of the School would deem reprehensible. When the seemingly healthy enemies of the church drop dead in broad daylight, citizens tend to assume it was by an act of God, rather than the immoral act of subterfuge.

Their primary weapon is a Hook and Chain, and they can 'mark' an enemy to perform extra abilities.

Like last month, we thought it would be cool to show you a line-up of the Divine classes, so you could get a feel for them all together. 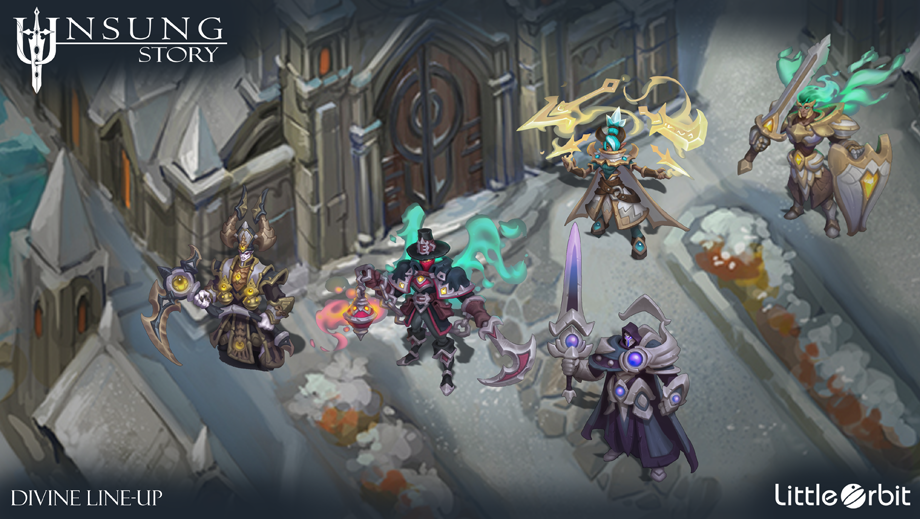 We completed Alionne last month, so we'll finish off with the last of the Saxtel classes. Here they are along with some gender swap concepts.

This class is unlocked early in the game. They are a simple but effective long-range attacker, capable of striking distant foes with ease - the backbone of any successful army. Archers maintain a backline, pelting foes with debilitating arrow attacks using their primary weapon, the Bow. 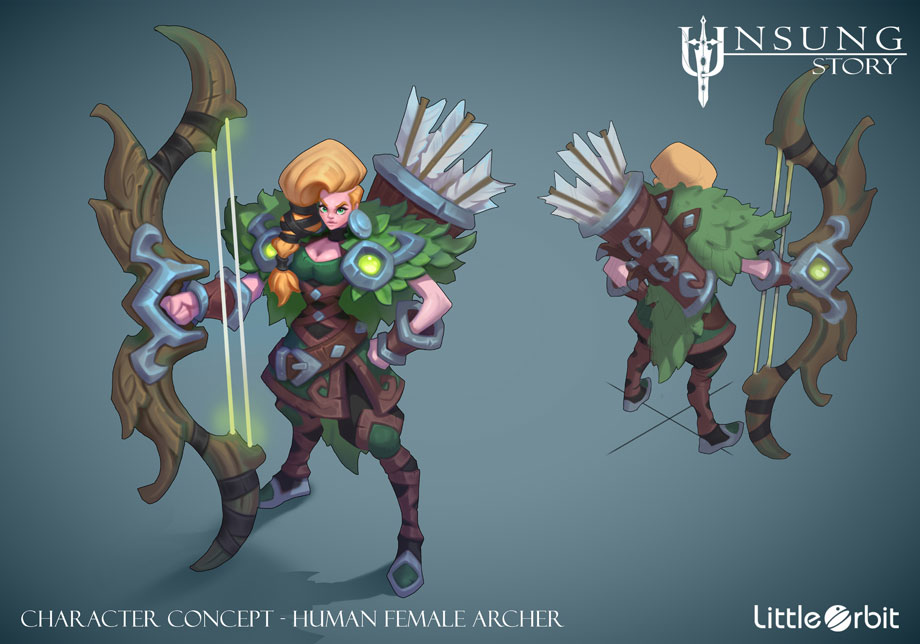 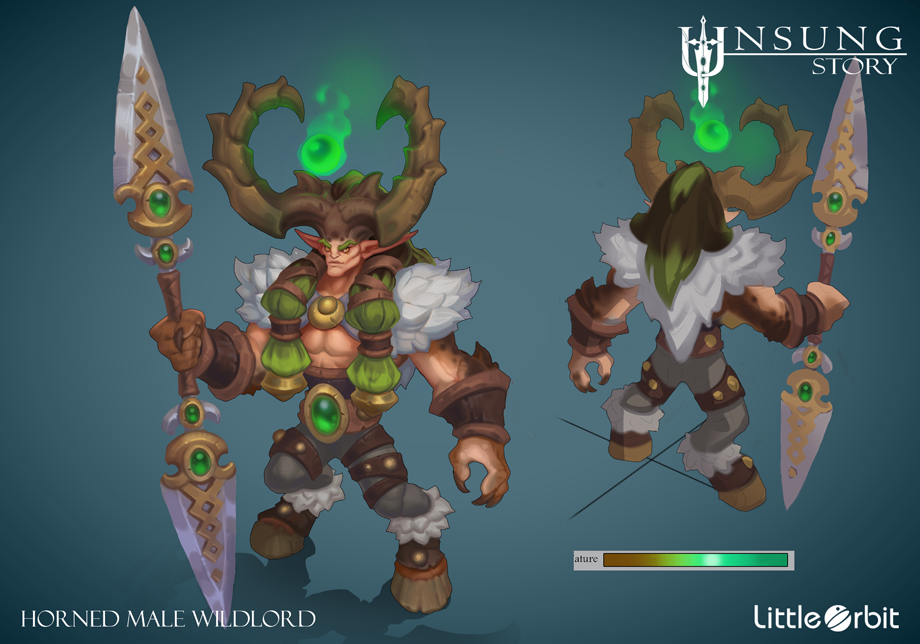 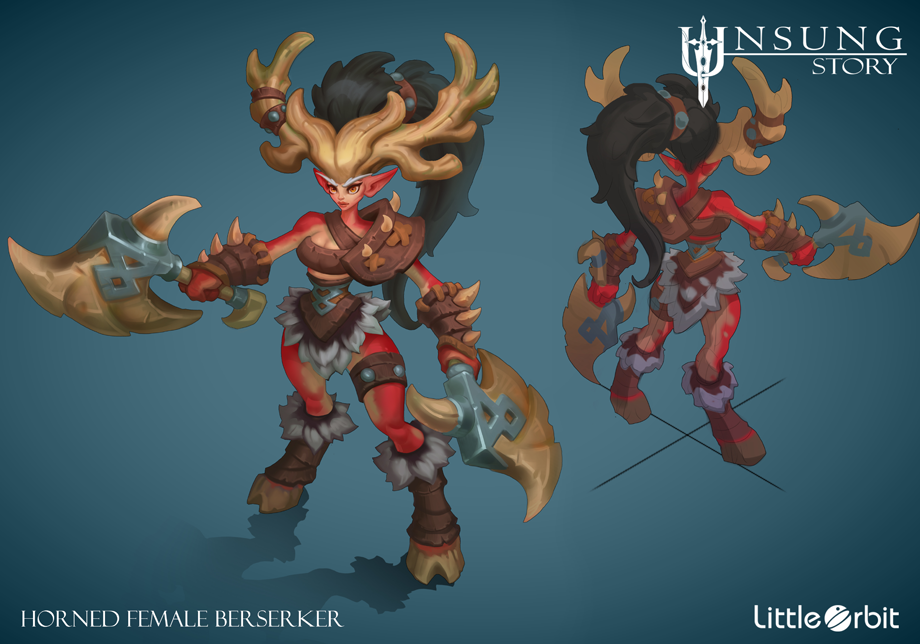 And here is a line-up of the Nature classes. 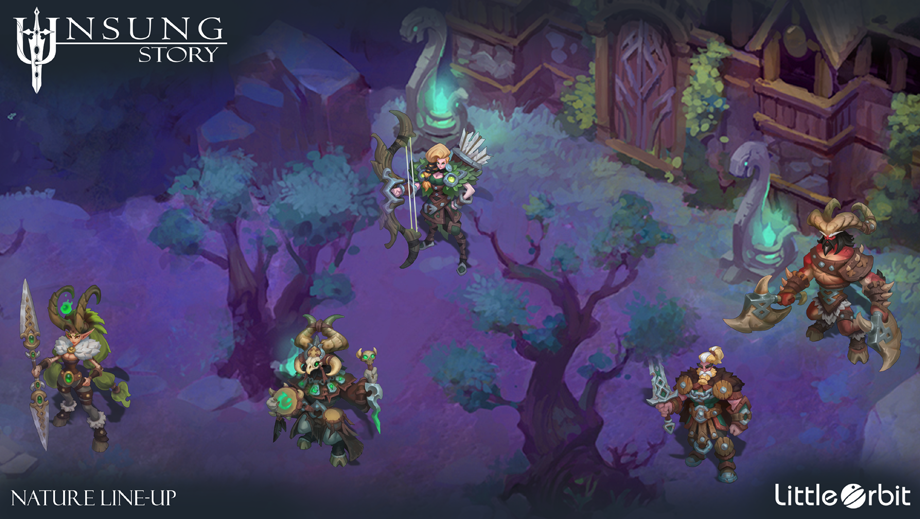 This month I'm also going to show off two of my favorite creatures.

An alluring female siren with a snake lower body. She has snake hair like Medusa and is covered with thick scales down to her snake body. Holding her small magical harp, she can attack with her tail or by her strumming an evil chord. 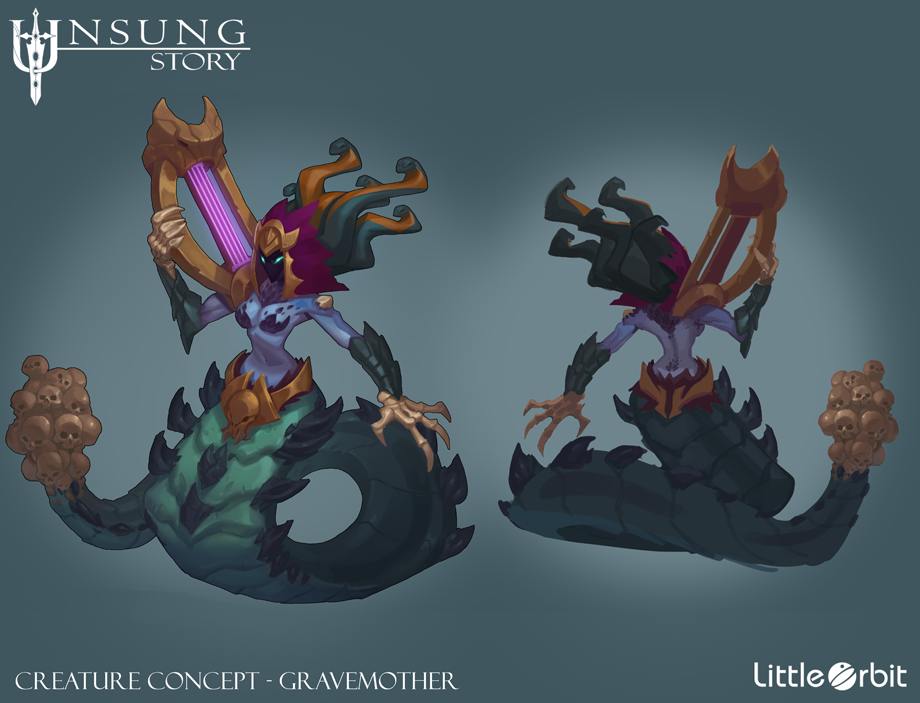 A large knuckle walking spore beast with a giant bee hive growing out of its back. When casting spells on enemies, it sends its bees out to swarm and sting the enemies or plunges its arms into the ground with roots spiking up under enemies. 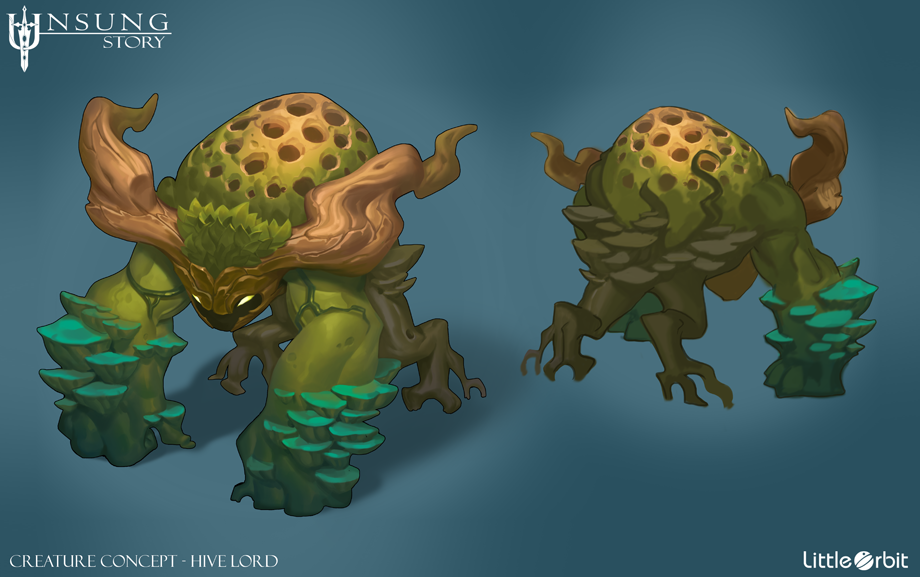