It’s been a little while since we’ve discussed any design elements, so I thought I would share some of what the team has been exploring with respect to the Triangle Grid system. Before I get into all the detail, I should share that this idea was one of the innovations I was looking forward to about Unsung Story. It’s something I have never seen implemented, and I hoped it would be a nice iteration of gameplay for the tactics genre.

Unfortunately after working with the Triangle system for over a month, we’ve come to the conclusion that it just doesn’t make a lot of sense. So now I’m going to walk you through our analysis.

With respect to any game design element, it’s important to establish who our audience is and what we’re trying to achieve. In this case, our primary target audience are fans of Final Fantasy Tactics, fans of tactics games in general, and then fans of RPGs. While we are hoping to modernize the approach, it’s critical that our grid system clearly communicates distance and direction on the map. As a player, these two factors (distance and direction) affect many of our choices when determining what a unit might do in any given situation. Can I get out of range of an attack? Can I get an advantage on another unit by attacking from another angle?

Looking back at the triangle grid announcement, we can see that their Triangle system essentially breaks down Hexagons into smaller triangles split like a pie from a center vertex. Functionally this is identical to a hexagon system, but since the characters can stand at the intersection of each triangle, it means the grid offers more discrete movement. 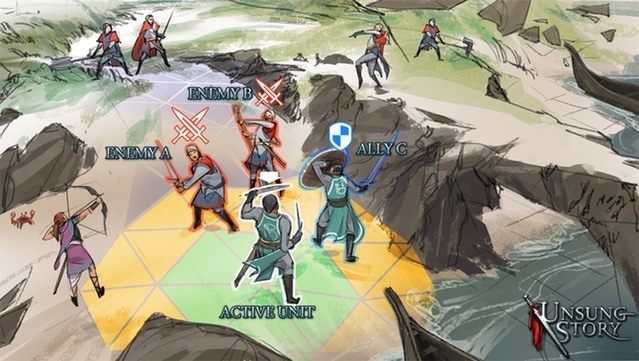 Later in development, PlayDek released work-in-progress screenshots that showed a traditional square grid system, but at this point they referenced their "8 Point Movement and Attack System". 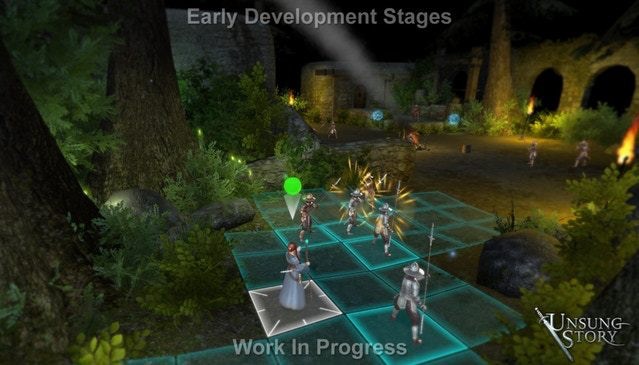 Ultimately, for our game we feel that there are only four viable options for movement:

NOTE #1: I added Hexagons here after we posted this update first in our Design backer discussion form. For me there really isn't a difference between Triangles and Hexagons, but one of our design backers pointed out that a straight forward Hex system would address some of the problems of the Triangle system, while still keeping some of the benefits that PlayDek wanted. He also pointed out that games like Wild Arms XF on PSP did a great job with a Hex system - which I agree with. However sometimes the product owner (me) has to make a judgment call on the approach. Personally I'm not a big fan of how bulky hex grids are, and that look has a huge "visual cost". If you google Wild Arms XF, you can see that the art team specifically worked with Hex shapes all throughout their environment to facilitate this choice. I want something less intrusive that serves the game mechanics but still feels like the spiritual successor to FFT.

NOTE #2: You may ask about Octagons, but unfortunately they don’t tile seamlessly, so they can’t really be used effectively for grid-based maps. So I’m going to assume that PlayDek had scraped the Triangle system and was moving towards a Square grid with diagonal movement. Now let’s compare Squares vs. Triangles.

Pros of the Triangle Grid System.

1) I think Triangles look cooler. I saw PlayDek’s early renders, and I was immediately intrigued. I imagined more freedom of movement and all sorts of new tactical options based on 6 directions of movement instead of 4.

2) Triangles are more discrete. They are smaller and rotated in different directions, so it gives us the ability to represent distance in new ways and shapes such as cones that stretch away from units or radials around a unit. This is what PlayDek illustrated in their mockups.

3) They also used color banding to group triangles and illustrate where one character was 1 unit of distance away from another character. Again, this seemed to offer some compelling gameplay.

Cons of the Triangle Grid System.

1) The biggest flaw of PlayDek’s Triangle system is the difference between a Hexagon and an Octagon. Since we’re only dealing with 6 sides, we quickly get into weird edge cases. All of their renders showed the “good” cases. But we intuitively think in 4 or 8 directions – not 6. Illustrating a cone from one angle on a character worked fine, but shift 60 degrees around that same character and rendering the cone again looked awful.

2) It’s difficult to see exactly what 1 unit of movement is. PlayDek cheated with the colored banding to show us 2 triangles together which forms a shape that illustrates distance better, but that banding is not always possible to render with respect to comparing distance between more than 2 characters at a time.

3) Being able to attack a character from 6 directions becomes a bit more confusing. Depending on the angle that character is facing, it’s not immediately obvious which way is the front, back and sides.

Pros of the Square Grid System.

1) Simply put Square grids are easier to read if we only deal with the four primary directions. You can quickly look at the map to determine how far you can travel. 1 square is 1 unit of distance.

3) Character facing is simplified. It’s easy to see what is behind or to the side of a character.

Cons of the Square Grid System.

1) In our opinion the biggest drawback to Squares is the lack of directional movement to the diagonals and the complexity that comes when you add diagonal movement. In any game that limits movement to the primary 4 directions, I still look at the zig zag walk that characters have to travel in order to go diagonally, and I just shake my head. No one would really walk that way in real life, so why do we force players to do it in a tactics game. The problem is that diagonals become a lot harder to handle, and they potentially break the game allowing the player to move farther than they would have with the 4 primary directions.

The design team felt the Triangle Grid system added complexity without really adding value. In fact it became harder to estimate distance or directional facing – the two core elements any good tactics game needs to help communicate. Based on our analysis, we’ve decided to stick to the tried and true Square Grid system.