April Update - No Foolin Around

I want to start by apologizing for last month. I had a couple updates planned after the 1st of March, but our Shards the Deckbuilder announcement went over so poorly that I felt it was best not to spam anyone for a bit.

For Kickstarter updates going forward, we'll stick to just things related to Unsung Story. Also these updates are going to be getting a little dense. I'm exploring ways to balance the information so that backers who want this information can get it, and backers who only want to play the game wont get flooded with too many messages.

April marks an important milestone for us - the end of Pre-Production (mostly).

I'm proud of the team and the hard work they've been putting in. With the exception of Art, we have everything else fairly well mapped out. Art is going a bit more slowly due to some minor changes in direction. We've tried a couple things that didn't work. My goal is to keep working on concepts till I'm happy.

We are going to be planning a Twitch stream of the current build later this month. We will be sending out more details over Facebook, Twitter, and email to the folks who registered on LittleOrbit.com.

We also have our first developer blog going up in mid April. So look for that in the Unsung Story forums on LittleOrbit.com.

This month I've included shots from our latest prototype all through out the update.

The usual caveats apply. This is all work in progress so you're seeing very very rough temp art with an unpolished grid system and temp UIs. To help clarify some of the screenshots, I'm also sharing lots of design elements. Some of this will shift and change as we get further down the road, but here is a quick rundown of where we are at.

Lots and lots of work here. We've been able to further refine the triangle grid mechanics, assess the best size of levels, work with verticality, and try different combinations of players vs. enemies.

This first shot is from our test level based on a map in Mission 7 near a small fortress where the player's objective is to capture an enemy unit. It illustrates that we have reduced the overall size of the level from previous screenshots. The red areas are placeholder "ladders" which allow you to travel up to higher areas. Elevation in the map gives specific advantages and disadvantages. 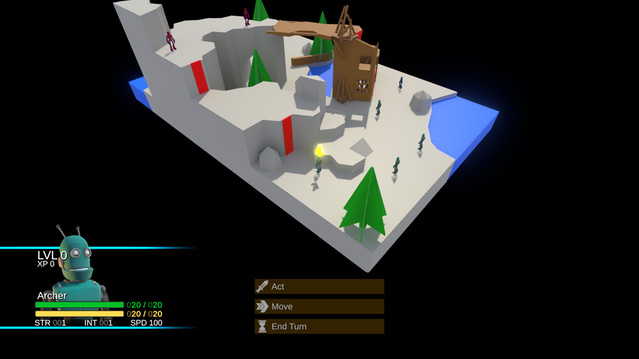 We're on the 2nd complete draft of the design. It's currently well over 100 pages. All 20 classes have been created, named, and assigned skills to give them a unique role in any party. We've tried to simplify what worked in Final Fantasy Tactics without sacrificing any depth. We also have in initial class tree and progression mapped. Remember these classes are split up across the 4 schools that we've announced: Technology, Mana, Divine, and Nature.

This feels a bit unceremonious, but you'll see plenty of references in the screenshots this month, so I figured it was fine to spoil them all now anyway. I'll let you guys try to figure out which ones go to each school.

Here are some shots of several skills we're playing with: 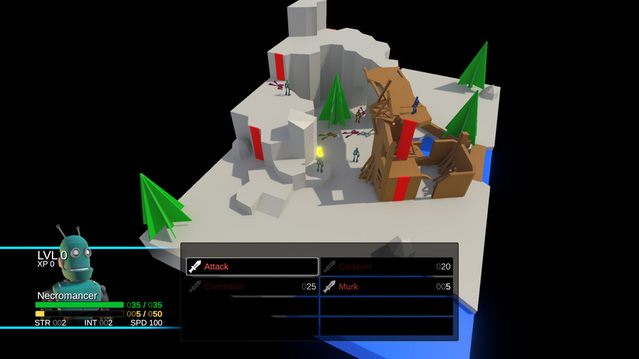 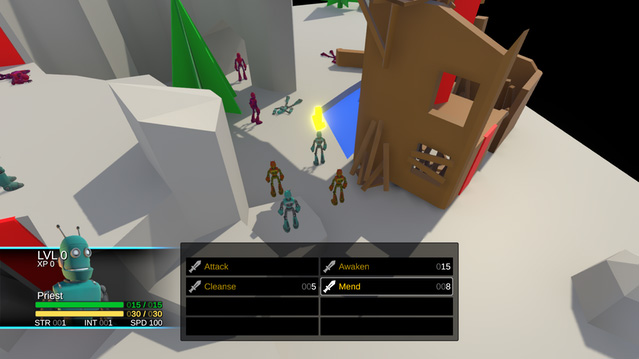 We've done more work on how stats are calculated behind the scenes and how raising a unit’s level increases these stats. While the numbers are prone to change throughout development, the equations should remain the same from here on. We are also starting to work through how to share this information with the player including the Stats/profile inspector, Turn queue, Character selection and other things like how items display info on the shop depending on what characters you currently have.

Here are the key character stats that we have decided on: 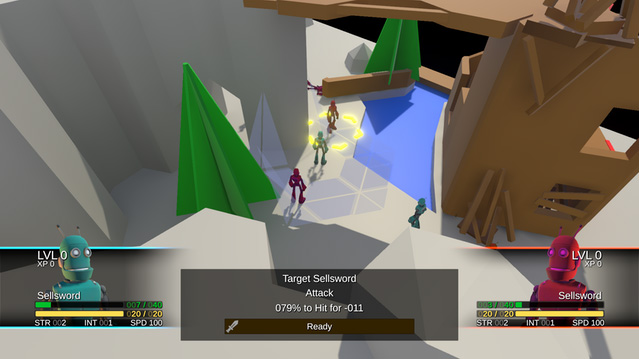 We've got a solid Weapons List. It isn’t finalized, but its a good first-pass. There are a few major things we are still working out. The biggest are the special effects of some weapons and how to limit their power. There's a scythe on the list that I'm rather partial towards. It helps you regenerate Focus every time a unit on the battlefield dies. We've also spent some time working through the consumable items. This is useful for the engineering team to start on implementation of the Physician, who can make consumables. 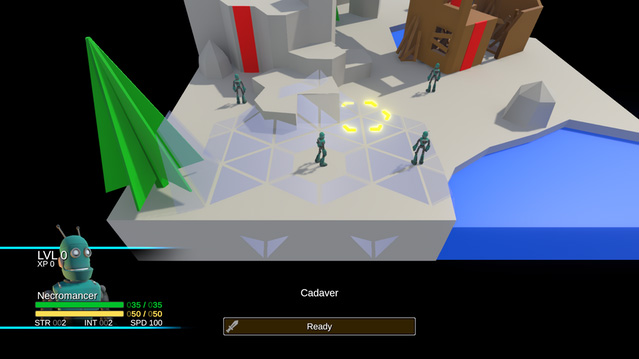 Necromancer putting out a weak cadaver

Lots of work nailing down each screen in the game and the flow between them. This flow helps us visualize where the player will be spending the majority of their time in game.

We'll be revealing a couple special things about the World Map in updates to come.

Again not quite final, but it’s getting close. We are working out where and when its okay to access the shops, some more information on armor/accessories and the cost of items. We've spent quite a bit of time working through recruiting new units. We are currently designing for permadeath with any non-Story character units. This means that when they die, you'll need to replace them.

Additionally each potential unit that you can recruit will look different. Their appearance is randomly generated to provide a lot of fun visual diversity - something that Final Fantasy Tactics couldn't do with their units due to the 2D sprite implementation.

We have completed bubble maps for nearly all of the levels in all of the chapters. The designers have gone through each one and identified the location, story character requirements, and primary objectives. I'm starting to see "gray box" layouts for various maps which gives us an opportunity to get them up and running in the prototype as quickly as possible.

Gray box layouts are a bit more detailed than what you're seeing in our prototype shots. These are much less blocky and have actual level geometry. 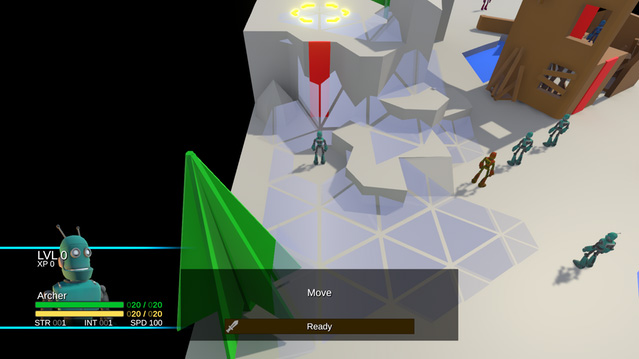 Archer moving his way up

That's it for now! Hope everyone enjoys their time off.